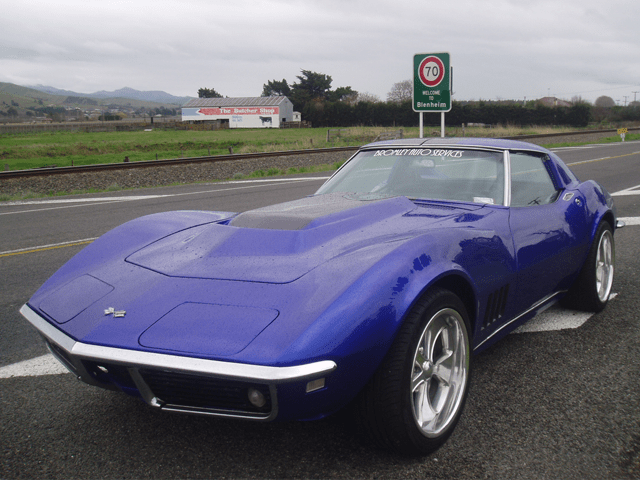 Carl bought this car as he has always really wanted one.  So when this little gem came up, Carl figured it was just the diamond in the rough he had been looking for: matt black, automatic, with a pretty sad 350 Chevrolet engine.  First things first, the matt black had to go.  So we sent it in to get some repairs done on the fibre glass and had it repainted in a custom metallic blue.  We fitted new Boyd Coddington18x10 and 18×9 Magneto wheels to it and just drove it for a couple of years.  Until the oil leaks drove us crazy so we decided to fix them … which resulted in the 350 being stroked to 383 with new alloy heads, roller rockers, air gap manifold, Holley 650 double pumper carburettor and MSD ignition.  The automatic transmission was disposed of and replaced with a Super T10 four speed manual with a heavy duty carbon Kevlar clutch … Which seemed to fix the oil leaks!!  We dove it four about twelve months before the interior got the better of us.  We stripped the existing interior out, imported new parts and replaced the carpet and dash and re-covered the factory seats.  Due to damage from the February 22nd earthquake in 2011, it was time to tidy up the body again, so it was into Steve Allan Auto Refinishers to get all the fiberglass repairs done and a full repaint, along with the addition of a charcoal stripe.  It is still a work in progress, but we are pretty happy with where it is at now.